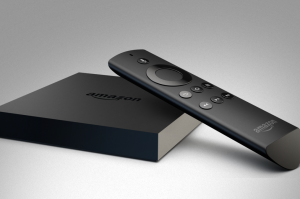 a digital media player and microconsole developed by Amazon.com. It is a small network appliance and entertainment device designed to stream digital audio/video content to a high-definition television. The device also allows users to play video games with the included remote, via a mobile app, or with an optional game controller. The device features 2 GB of RAM, MIMO dual-band Wi-Fi, and a Bluetooth remote control with a microphone for voice search. It supports 1080p streaming and Dolby Digital Plus 7.1 surround sound but is dependent on internet bandwidth of the user. Unveiled on April 2, 2014, the Amazon Fire TV was made available for purchase in the US the same day for US$99 and was launched with a video game called Sev Zero. Amazon Fire TV is also available in the UK.

is a digital media player and a microconsole developed and sold by Apple Inc. It is a small network appliance and entertainment device that can receive digital data from a number of sources and stream it to a capable TV for playing on the TV screen. It is not, despite its name, an actual TV but, rather, requires a separate TV or screen to display any content. The content on Apple TV is similar to the other streaming players Netflix, Hulu Plus, Amazon. In addition you also can play play anything in the iTunes library.

There are many others most do pretty much the same thing. Similar looking hardware playing similar services among these are the Roku Streaming Stick does the same thing as the Roku box but has a similar form-factor as the Chromecast. The Netgrear Neo, Western Digital WD TV, Keedox Smart TV, Sony NSZGS8 Player w/Google TV and the G-Box Midnight MX2 are all very similar to the original Roku.

In conclusion, I only have experience with the Roku and the Chromecast. I like both devices, each have there pros and cons but they are both great players. As for the other player I must assume that they are all similar user interfaces as the Roku.

This site uses Akismet to reduce spam. Learn how your comment data is processed.